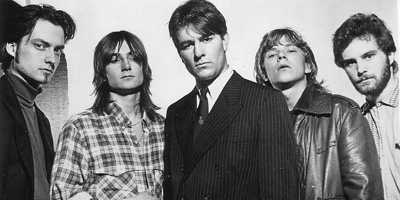 In The Air Tonight

After forming and rehearsing for 4 months and playing only 2 shows at illegal clubs in the fall of 1986 – we (Union Carbide Productions) went in to The Music A Matic Studio in Gothenburg to record IN THE AIR TONIGHT.

We were heavily influence by Husker Du, The Stooges, Captain Beefheart, Einsturzende Neubauten, Black Flag and lyrically the so called “Yuppie Era” that was emerging at the time. We tried to be the antidote to bands like “Johhny Hates Jazz” and “Spandau Ballet” etc. A true reflection of the time so to speak.

We did the album in two sections from october 1986 to january and later january 1987 and the album was mixed by ourselves at the end of february 1987… I took a while for us to get a label because nobody wanted to have anything to do with us at the time. The album was finally released in september (9/11 of course!) of 1987 and had very mixed reviews in Sweden. Either you hated it or loved it. For me it was a template to continue recording and making music, go on tour abroad and save the world from shit.

Taken from a Mick Jagger quote from the film about the Rolling Stones Altamont show that ended the 60´s dream with singer Ebbot Lundberg referring to the end of the 80´s which was the opposite of what the 60´s was all about.And this was a tombstone over the 80´s.

A statement from the second Indigo generation living in a yuppie world ruled by corproctracy and self denial. This is the darkest and most personal album because of some turmoil within the group. The band had after releasing “In The Air tonight” been touring in Europe and the USA (an unreleased CBGB´S live show is soon to be released). But because of hard living and scandals, bass player Per Herm and guitarist Björn Olsson decided leave the band but agreed under Ebbots request (as the main producer and visionary), to take part in some of the recording session during the making of the second album. (later that year with guitarrist Ian Person and bass player jan Skoglund)

The recording session were from September – November 1988 and the album was mixed in February 1989 by Ebbot Lundberg, Michael Ilbert and Henryk Lipp. After turning turn a record deal with Sub Pop, Radium decided to put the second UCP album out on the Skyclad label with a different cover. The album sold poorly as the precessor “In The Air Tonight” but Union Carbide Productions gained new fans all over the world .Some of of the fans were Jello Biafra, Lydia lunch, Jim Thirwell, Kurdt Cobain (Nirvana even posed with yuppie suits later on) and Mark Lanegan from the Screaming Trees and German journalist Rocco Klein among others. The album were considerered by many fans to be a masterpiece. It came out in late march in 1989 which was just before the so called “grunge” explosion.

“It is my favorite album because of the confusion, disappointment and agony that was going on” and I realized I had a mission to fulfill and keep the band alive: says Ebbot Lundberg. Which was to survive this world and era and prepare a way for a diffent world. Which is obvious when you listen to the last song “Career Opportunities”.
Cheers! Ebbot Lundberg

From Influence To Ignorance

After a lot of touring around the world and ending the 80´s. Union Carbide decided to record a new album. After Per Helm and Bjorn Olsson leaving the group, new guitarist Ian Person and Bass player Jan Skoglund added a new energy with a more laid-back sound. Especially the tune “Golden Age” which was a collaboration between Ian Person and Ebbot Lundberg, who also suggested the heavy stereo mix as a producer. Union Carbide had now left the 80´s behind and were heading to a more psychedelic and melodic sound. The raw energy was still there but the punk influence (except the attitude) had changed to a more melancholic and shamanic landscape. You can obviously hear a lot of sounds that would be developed in future band “The Soundtrack of Our Lives” on this precessor.

The album was unfortunately not released outside Scandinavia because of their label Radium had gone bankrupt. It was at the time only released in Sweden and germany (they say). But the album made Union Carbide Productions to gain more and more fans. And “Golden Age” became a minor hit in Sweden. It has now become a classic.
Cheers! Ebbot Lundberg

Side Two
How Do You Feel Today?
Solution
Anytime
Mr. Untitled
Swing

The final album by Union Carbide Production after recording sessions with Steve Albini in Chicago. This is the “real” cover and song order for the vinyl release. Or for any proper release for that matter. Unfortunately all songs during the “Swing” sessions were released on CD only by their new record label MNW without UCP´s aprovement. Which mainly led to the split of Union Carbide Productions in 1993. The decision to use Steve Albini as a collaborator was not an idea coming from the band but the label who knew by commercial interests that Steve Albini was going to record Nirvanas “In Utero” (and their last album). Union Carbide did not want to become a part of the “grunge” explosion but to went to Chicago anyway by curiosity and also to do some live shows. The atmosphere within the group was tense but a sense of knowing this was the end of the group – the band just did the recording sessions and the shows and got back to Sweden to mix the album only to put an end to the whole thing.

The Album came out in November 1992 and Union Carbide decided to end their career by touring the year of 1993 so they could repay the leasing costs for their touring van and other economical backlashes. It is a emotionally loaded album and for the first time you can hear the end of the last track “Swing” ending the way it should. In turmoil and beauty.

“Finally the world can hear the album the way it was meant to be and it has some really good songs on it” – says front man Ebbot Lundberg. Listening to it now I realize that the song “TV-spiders” was reallly about the arrival of internet without rationally knowing. And there are some really good lines for sure. Especially on “Chameleon Ride”, “Solution”, and the title track “Swing”. I think the last lines really sums it up perfectly: “Better look four another end – Better wait for the road to bend – Now tell me what´s right and I´ll tell you whats´s wrong – So get in the swing for another song and feel my love…”

Rest in peace Union Carbide Productions. The Soundtrack to our lives so far so good.